Dear friends: What day and month in 1919 did the General arrive in Antwerp and on which ship? From there how did he traveled to Germany? Any info is most appreciated. Thank you. Walter Godinho./
Top

I haven't found any dates for Lettow-Vorbeck's arrival in Antwerp and subsequent mode of transportation to Germany but several sources gives his arrival in Germany to be in January 1919. For example...


Here's also a departure date for when Lettow-Vorbeck left Africa for Europe...

On November 14, Lettow-Vorbeck mets at Abercorn, on the banks of Lake Tanganyika, the Bitish general Edwards, to whom he surrendered his army of 155 Germans, of which 20 officers, and 1156 native Africans. Lettow-Vorbeck arranged for the re-patriation of German soldiers and prisoners of war before the departure for Germany in January, 1919. The Germans moved across Tanganyika to Kigoma, from where they took the railway to Dar-Es-Salaam. From here they left for Europe on January 17, 1919.

Dear Doctor Krollspell: Thank you for your comments. It seems that the small period of von Lettow-Vorbeck's return from Antwerp to Germany is not considered a major event. So let it be. Regards. Walter.
Top

Maybe you can find the detailed information that you want from the Man himself. This is supposed to be a real classic at $32... 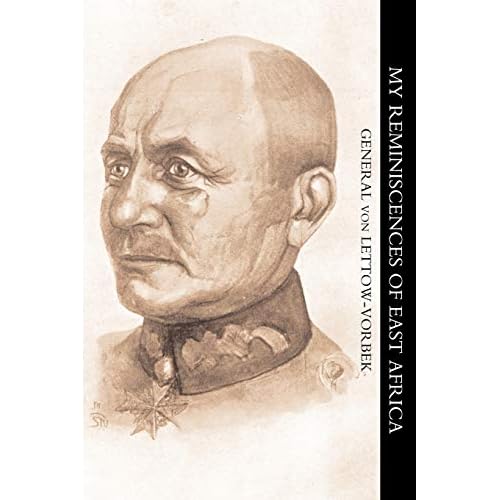 And while we're talking about von Lettow-Vorbeck, here's a good portrait photo of him showing all his decorations including the Pour-le-Mérite with Eichenlauben.

The ship he and the remainder of his German officers and NCOs sailed on the SS Transvaal, formerly the Feldmarschall. They were luckier than their comrades in captivity, who waited more than a year to return from India and the Middle East.
Top

Unit's, plural? Other than that, I'm stumped. Unless it isn't another German or WWII unit.

No, not the Brandenburgers!

There were a number of units, namely the Schutztruppen.

The traditions of all these units were carried on in 1937 by a certain unit.
Top

Hmm...Sorry, must have mis-interpreted the question...thought it was alluding to the Brandenburgers roots coming from that campaign. One of Lettow's officers created them, no?

I know the Schutztruppen, but I'm struggling to come up with a connection...
Jock
Top

That would be Infanterie Regiment 69.

Learned this while trying to solve one of the photoriddles! More than merely entertaining

Specifically, the I., II. and III./Infanterie-Regiment 69 took on the traditions of the various Schutztruppe.

The interesting thing with the IR 69 that after it's placement in the 20. Infanterie-Division, it was on April 1, 1940 re-designated as Schützen-Regiment 69 and part of the newly raised 10. Panzer-Division. After participating in western campaign 1940, the Regiment (and the 10. PD) went east in June 1941, fighting the russians until the spring of 1942 when it was time for re-fitting in France.

The 10. Panzer-Division, and the now Panzergrenadier-Regiment 69 then went to Tunis in December 1942 to fight for half a year in the last campaign of the war in North Africa, finaly surrendering in May 1943.

The Infanterie/Schützen/Panzergrenadier-Regiment 69 was never re-constituted after the defeat in Tunis. Still, a real historical twist of fate that the Regiment bearing the traditions (as of 1937) of Lettow-Vorbeck's Schütztruppen from the WWI campaign in Eastern Afrika ended up fighting and surrendering in Africa...

Extremely interesting Guys, I never knew that the Schutztruppe were reincarnated, even though I've been a fan of Von Lettow-Vorbeck for years. His campaign in what is now Tanzania and Angola is the stuff of legends. One of the very few mobile campaigns in WWI.

Very Best,
David
Death is lighter than a Feather, Duty is heavier than a Mountain....
Top

From the funeral of Paul von Lettow-Vorbeck in 1964...

Return to “World War I”